With all the stressful energy in the world today cooking is my therapy, so in the spirit of expanding my thinking to include the unfamiliar here are two very simple and delicious recipes from other cultures.😀 Plus, both can be frozen so you can enjoy the bright flavor of summer throughout the winter (if we ever have one here in California!

Muhammara hails from Syria and is a roasted sweet pepper and walnut spread that is to die for! The special ingredient that makes it so unique is Pomegranate molasses, available in most stores with a good ethnic food section. Our local health food store carries it and I live in a tiny rural town so you should be able to find it.  I made a few adaptations to a recipe I found in the New York Times so this is my version of their recipe.  This stuff is REALLY good so you might want to double the recipe and store some in freezer😋

Sofrito is a Puerto Rican sauce (similar to salsa) made mostly with bell peppers and LOTS of garlic, cilantro and culantro leaves. The latter are hard to find where I live so I used a bit more cilantro which apparently is a related herb with similar flavor. You can use both  bell peppers and spicy peppers or just the bell peppers depending on how hot you want it to be. I also found some recipes calling for roasting the peppers first or sautéing them, but most just blended everything together raw. I tried both techniques and decided blending everything first then cooking it for a few minutes in a saucepan worked great and was fast and easy.

Sofrito is used in many Puerto Rican dishes to add a spicy flavor.  It is similar to a Mexican salsa but with more peppers and less or no tomatoes. With 10 cloves of garlic it does have a kick but added to eggs, stews, soups, beans and/or rice it takes them to a new level of yumminess!  It is also used as a marinade for meats in Puerto Rico.  The  traditional recipes call for culantro (yes, it looks like cilantro but is a bit different) and hard to find so I just used a bit more cilantro which has a similar flavor.  I have experimented with different recipes; my first batch was overwhelmed by onions so this is my version with less onions and the addition of a fresh tomato.  For authentic Puerto Rican Sofrito leave out the tomato if you prefer.  You can use only sweet bell peppers or add a hot pepper if you want more heat but the garlic is a must! 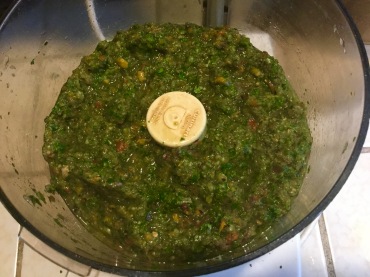 It seems every cook has their own unique version so experiment and see what you like. Try adding a bit of vinegar or more tomatoes or some different spices like cumin. You can freeze it in ice cube trays & pop a cube into whatever dish you are wanting to spice up! Here’s to embracing diversity😀